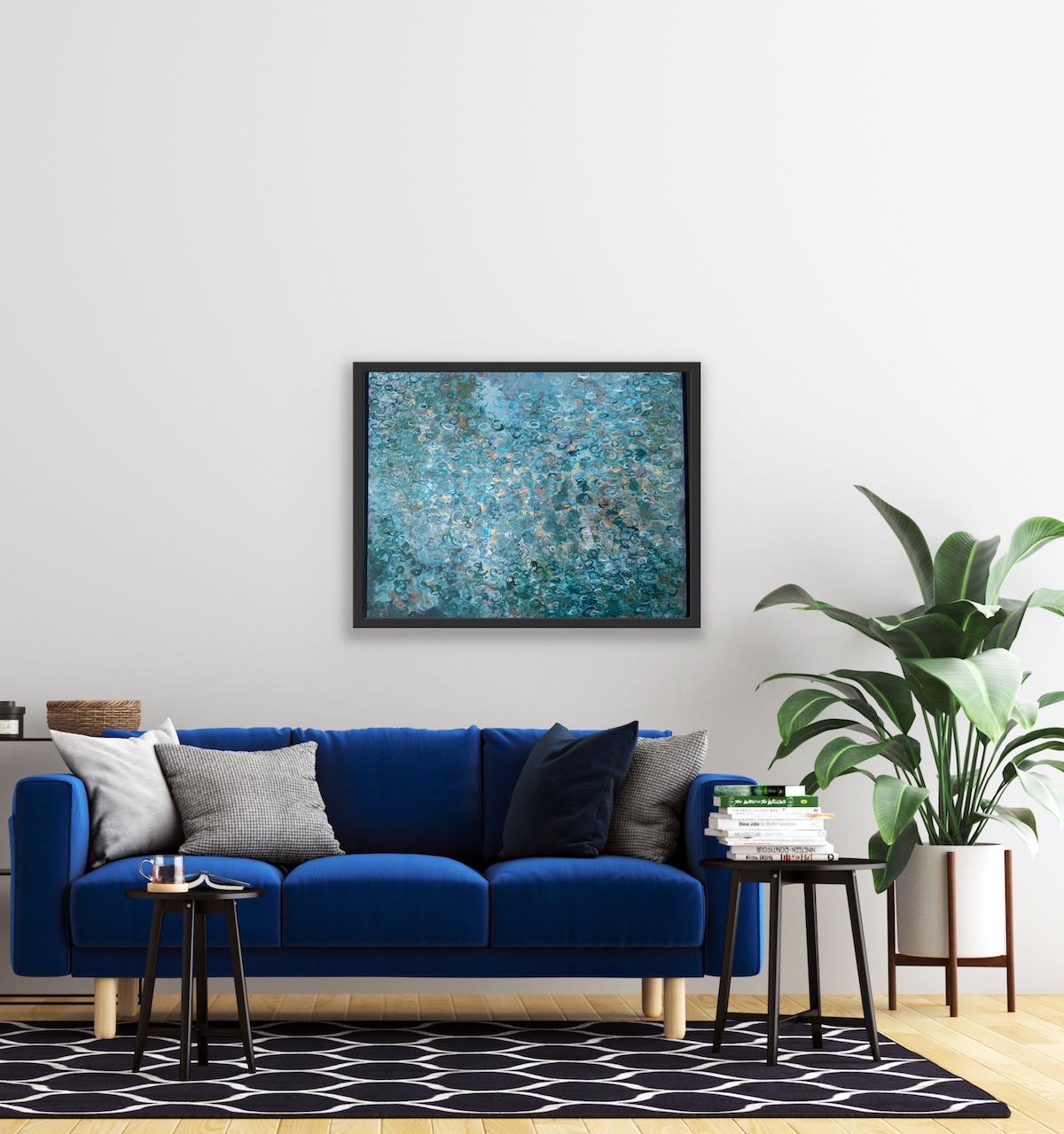 Indigo, navy, or cobalt – no matter what shade of blue it always inspires. Blue is the basis of so many of my contemporary artworks. Inspired by water, sky, oceans, and rivers.

A deep dark conceited look at what the ocean could and is deep inside it. Indigo

Indigo has been one of the most highly prized pigments in history. It has been cultivated in India for at least 5,000 years and has long been thought to offer medicinal benefits acting as a natural insecticide and having prophylactic and healing properties.

There are many different plants that produce the indigo dye, but the most common is indigofera tinctoria which produces a particularly high concentration of the dye. In Europe, prior to the 17th century, woad was the main source of Indigo, but this industry was ultimately replaced by the importation of Indian Indigo.

In 1631, seven Dutch ships brought back more than 13 tons of Indigo from the east equivalent in value to five tons of gold, illustrating the voracious demand for the blue gold. Indigo is primarily a textile dye that was dried and used as a pigment in medieval illuminated manuscripts and Japanese wood block prints prior to the early 19th century. From being a marker of great social status in historical textiles, Indigo became the colour of workers’ uniforms in the 20th century.

“Blue jeans are the most beautiful things since the gondola.”
Diana Vreeland, fashion columnist/editor and consultant to Metropolitan Museum of Art, 1903-1989

Blue jeans are a most enduring legacy, now a staple of the global wardrobe. Blue, for me, is calmness. Blue has such variety. When you bring blue into your room, you bring the sky, the ocean, and the vastness of what is our planet. We live on the blue planet.

After indigo, the deep, dark richness, there is blue. Blue and cobalt, the likeness of blue.

“I had left the visible, physical blue at the door, outside, in a street. The real blue was inside, the blue of the profound of space, the blue of my kingdom, of our kingdom!”
Yves Klein, artist in 1958.

Throughout history, blue has held deep symbolic and spiritual significance. For the Ancient Egyptians, it represented fertility, bounty, and protection. The ceilings of royal tombs were painted blue to embody the protective heavens. The Hindu’s blue is associated with the god Vishnu, who was coloured blue. In China, blue is one of the five colours used to visualise world order and signifies the natural world, springtime, youth, and immortality.

In Christianity blue was associated with The Virgin Mary. Ancient Egyptian produced the first synthesised blue pigment, known as Egyptian blue. Cobalt has been used as a colouring agent in glass and ceramic glazes since the 17th century. But it was not until the 13th century that blue became a prominent colour in Western art with the arrival of ultramarine, derived from lapis lazuli in Afghanistan. Ultramarine was more expensive than gold and became the symbol of wealth and prestige.

“Never has a pigment been better named than ultramarine blue. Fashionable, even today, in its nomenclature! It is ultra in every way.“
Karen Fitzgerald, American painter

Azurite was frequently employed as a cheaper alternative, but with the introduction of Prussian blue in the early 18th century, followed by cobalt blue, cerulean, and synthetic ultramarine, the monopoly of the true ultramarine began to diminish.

These advances elevated blue on the 20th century artist’s palette, highlighted by artist Yves Klein and his international Klein blue, a shade of pure ultramarine that Klein claimed to have invented and trademarked.

Blue is such a wonderful part of our palette, the mere range and excitement. Is it a cool colour or perhaps a warm colour? With contrast it creates incredible beauty. I love working with the vast spectrum of blues.